Yemaya Recommends/Book: The Island of sea women: A novel

“Every woman who enters the sea, carries a coffin on her back. In this undersea world we tow the burdens of a hard life. We are crossing between life and death every day.” Sun-Sil, Chief Haenyo of the diving collective in Hado, Jeju, speaks these words while preparing Young-Sook and her diving partner Mi-Ja as they take their first dive as Hagun(baby divers) with their collective. 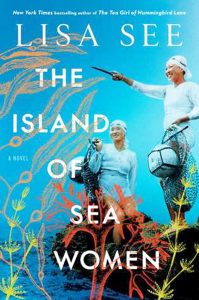 These traditional words uttered before dives, foreshadow and echo sorrowfully through the novel The Island of Sea Women by Lisa See; whose latest novel explores the world of haenyeo, the women free divers of Jeju Island. Armed with their training, which begins in girlhood, and supported by their collective these women free dive up to 30 metres, even in freezing waters of 1°C (even through pregnancy and childbirth!) to fish for sea urchins, shellfish, abalone, sea grasses and octopus.

See’s novel centres around two young haenyeo – Young-Sook and Mi-Ja – from their childhood in 1938 to their present day lives in 2018. Foregrounding this relationship and weaving through it, the novel explores the haenyeo community and the intricate ties between women as well as the momentous historical arenas of Japanese imperialism, World War 2, The Jeju Uprising and the Korean War.

There have been numerous studies conducted on the haenyeo, focussing on their culture and shamanistic practices, their matrifocal society, their methods and systems of governance and management of marine resources and the scientific marvel of their diving capabilities. As Jeju’s tourism industry flourished and became one of the mainstays of their economy, the haenyeo were also promoted as the ‘mermaids’ of Jeju. See’s work is an immersive experience which firmly places a reader in the midst of their lived realities. It goes beyond deftly illustrating these aspects of life and shares a uniquely insightful perspective into the haenyeo community and their lived experiences. The narrative also explores tenure rights and transfers, traditional knowledge, governance systems, sustainable use practices as well as the rise and decline of haenyeo and their fishery.

Scenes with collective bantering while preparing or winding down from a dive are delightful as the divers exchange comments from their husband’s childrearing skills to their own phenomenal bravery, courage and skills. Revelling in their economic independence, decision making capacities and self-worth, these bubbles of feminist comraderies and communities are held in stark contrast to the wider patriarchal society within which they exist and which ultimately wreaks havoc in Jeju.

The novel brings to light the leadership and courage of haenyeo in the 1930s during the period of Japanese imperialism. One of the largest ever fisher struggles led by women against exploitative Japanese practices in 1932, it is also considered to be one of the most influential parts of the resistance movement. The reader experiences this movement through the perspectives of the young protagonists which adds another fascinating and emotive layer. The value of the movement transitions from being solely outcome based and focusses instead on the power it holds for the young peoples within the community itself. One that extends far beyond the day of the march itself and plays out across their lives.

Ultimately, this is sweeping narrative exploring the complex and tenacious bonds between women and the backlash of sorrow, rage and grief experienced when those bonds are broken. The trauma that ripped through Jeju in during the late 1940s is mirrored in the protagonist’s journeys. Healing requires recognition and reparations that extend beyond this narrative and can apply to our increasingly fractured world and fisheries
at large.